Farwell’s are based in Sway and regularly supply plant hire machinery in Dorset. For any enquiries related to our plant hire in Dorset, please call or visit our website service pages for more information. Please see below examples of the plant hire work that Farwell’s have completed in the Dorset area:

Supply an excavator to go down into the pond on excavator mats and, starting from the furthest side, clean off the weed and any silt in the bottom of the pond and cart this up to the fill area where it can be placed using a site dumper. Complete the process until all the weed and silt has been cleaned from the pond. Remove the excavator from the pond floor and make good any damage to the banking.

To widen the existing bund on your boundary adjoining property, at the lower end of the hotel field. With first removing the existing fence, to then load, cart and place soil from adjacent stockpiles on site to widen the existing bank by three metres at the foot of the bank and joining in to the crest of the bank as per the drawings supplied. The bund would then finish approx. two metres in height. Grading to the desired shape and leaving it to yourselves to re-instate the fencing. Using 20T excavator.

For the re-instatement work at Roe, Pitts Wood and Kings Garn Inclosures we would supply two 360° tracked excavators, including fuel and operators, to carry out the works on a daywork basis, as directed.

Clearance of the surplus soil created from your newly constructed car park; accessing the stockpile via the rear entrance around the playing field. Clearing all the surplus soil back down to the original ground levels and then levelling off any rutting around the playing field that has been caused by the lorries accessing the site, by using the excavator and finishing up at rear gate.

The demolition of three blocks of five single garages, two of these blocks being joined to adjacent houses. To separate the garage walls from the houses by means of saw cutting the brickwork.

Using a 12 ton excavator equipped with root rake to clean the area in question, and dumper to transport combustible waste to the “fire pit” on the gravel drive. The same machine equipped with grading bucket would then level the area as appropriate.

Test Holes: Break out six holes approximately 300mm x 300mm by 400mm deep in locations to be advised removing all spoil from site using a road saw to cut the concrete and an excavator mounted hydraulic breaker to remove the concrete.

Demolition: Demolish the wall on the south side of the building using the large excavator to enable the roof to be dropped to the ground on this side. With the excavator fitted with the grab attachment, pull this section of the roof structure clear of the overhead lines and putting to one side.

Once as much as the roof structure as possible has been cleared using this method, pass wire cable through the building attached to the large excavator and use this to pull down the remainder of the building situated underneath the wires to ground level.

Once the debris is down to a low enough level where it can be handled with a smaller excavator then this would be cleared back beneath the lines to a safe point where the larger excavator can clear away the debris and load into roll-on roll-off containers for removal off-site, separating the debris from the hardcore. The hardcore to be stockpiled for crushing for use on-site.

Once the debris has been removed, the smaller excavator would then be fitted with a concrete breaker to break out the concrete slab which lies underneath the lines. This would be moved to a safe distance to be handled by the larger excavator.

With all the concrete and hardcore removed from underneath the power lines, the debris loaded into the containers and removed from site then the large excavator, fitted with a crushing bucket, would then crush all the hardcore and stockpile for future use elsewhere on the site.

To then build the dams to take the silt from the pond, where possible forming this into a bank to be landscaped at the end of the works to enable you to gain access all the way round the pond itself. With this done, to then dig out approximately 1m of silt from the pond back to the original bank lines using a 21m long reach excavator in conjunction with a standard 15-tonne excavator to place and level the silt. This is with both excavators working off the bank to do this.

This included the stripping back of 150mm of topsoil from an area of some 26,000m2. Once this has been done, to then dig a key trench underneath the reservoir bank to help avoid any slippage of the bank when the reservoir is full. To then start the excavation of the reservoir, first filling the key trench and then creating the banks, compacting this material in, with any shortfall of the reservoir banks being supplemented from the cut areas of the main glasshouse footprint.

As mentioned, the drawing shows the crests on the reservoir at 2m; this is impractical from our point of view in construction and also for yourself, I feel, at a later date for maintenance, etc, so we intend to increase this crest width to 3.5m. This would obviously take extra material off of the cut area which may affect the balance level, but this should not be significant.

Once the reservoir banks have been filled and graded to the desired shape, to then carry on with the cut and fill operation over the main footprint of the glasshouse until the balance has been achieved and the area is graded level.

To then replace a layer of topsoil over the footprint and the reservoir banks 150mm thick and then, finally, trimming the glasshouse footprint off and levelling the whole area. With this done, to then demobilise the plant from site, leaving the area clean and tidy.

Please note: No deliveries accepted before 8am. 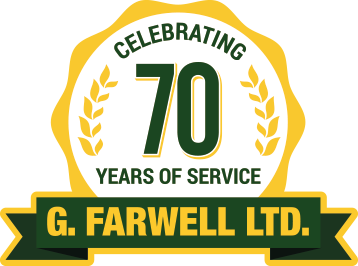 Customers are welcome at our site where you can talk to a member of staff to purchase any of our goods or services. Our saw mill is on site where we produce a wide range of quality timber products including fencing and gates.